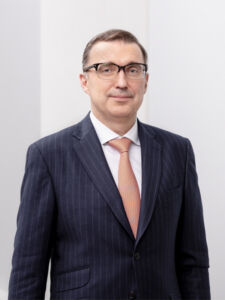 Andres Sutt is the Minister of Entrepreneurship and Information Technology as of 26 January 2021. He is a member of the Estonian Reform Party. Andres Sutt graduated from the University of Tartu in 1993 with a degree in finance and credit; from INSEAD in 2008 in the Advanced Management Program, and from Harvard Law School in 2015 in the field of Negotiations and Leadership.